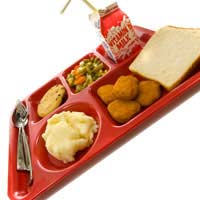 The problem of childhood obesity is one that is now sweeping the nation and is estimated to become one of the biggest problems of the next decade. With this in mind our schools and colleges are taking the lead in trying to reduce the risks of our children falling foul of this problem by making changes in what they eat and also how much exercise they get.

The problem of childhood obesity has now reached such a level that all schools within England Scotland, Wales and Northern Ireland are looking at ways in which they can tackle the problem without introducing a nanny state mentality.One of the most important areas to address when tackling this problem is: what exactly is it that our children are eating? In the last year or so Ofsted – the official body for governing schools – has determined that changes should be made to the sort of food that is served within school canteens in order to help with combating the problem of child obesity.

One of their foremost recommendations is that all canteens try and provide their patrons with a healthier alternative to the usual menus which consist of chips, fried foods and takeaway-style foods. Other schools have begun operating a policy of only allowing pupils to leave the confines of the school at lunchtime under the written authority of a parent or guardian so as to try and reduce their chances of buying these fatty foods off site during their lunch break. Changes are also being made in the legislation which governs the use of vending machines in the school environment and the products that they are allowed to dispense; this is designed to cut back on those snacks and fizzy drinks which are high in so-called E numbers; E numbers are normally to be found in colourings and preservatives.

Of course it is very difficult to enforce such a process to its fullest and schools rely heavily on the support of their students’ parents in this endeavour. Those children who do not take free school meals and are provided with a packed lunch are asked to try and aim for a healthier option such as a sandwich, a piece of fruit, a yogurt and a non-fizzy drink. Many of the major supermarket chains now cater for packed lunches for children.

Part of the problem with obesity in children is that it is something that comes about due to a hefty intake of not only fatty and sugary foods, but also foods which are high in artificial colourings and sweeteners. This is also very true of carbonated drinks and fruit juices. In addition to the policy on school meals schools are now encouraged to offer more physical education where possible. This will include the usual syllabus but can also include after school activities – where possible – such as swimming, cross country running, gymnastics and badminton.

All of these activities are good not only for helping a child’s metabolism but also for strengthening muscles, ligaments and exercising their airways.

Schools are also – with the aid of their Parent/Teacher Associations – helping to educate parents as to the dangers of childhood obesity and are now working in conjunction with Ofsted on a scheme called the National Child Measurement Programme. This programme aims to measure the height and weight of a child upon entry into schooling and follow their growth and development through the years to predict and understand certain trends associated with childhood obesity.

It is worth noting that one of the reasons Ofsted has developed this programme is to try and help combat not only childhood obesity but the illnesses associated with it: these include Type 2 Diabetes, psychological conditions such as ADHD (Attention Deficit Disorder), and also cardiovascular ailments such as Asthma. If you are considering enrolling your child in a particular school it is worth asking as to their policy on childhood obesity and what steps they as a school are taking to combat it. It is also worthwhile speaking to the Parent/Teacher’s Association if possible and to ask about any activities or events they run to support the school in their endeavours. You could also ask if your school has a copy of their weekly canteen menu so that you can see for yourself what options are available to your child.

What is and Isn't Allowed in a Packed Lunch

School Meals and your Child's Health